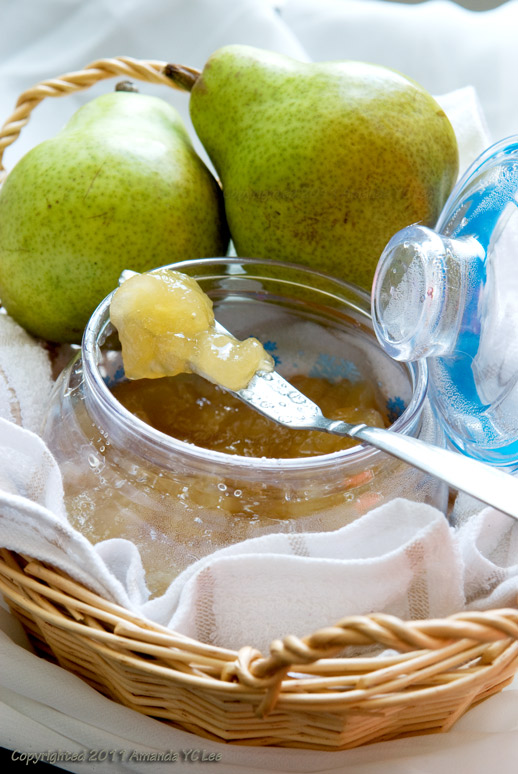 Does anyone have any memories of tasting something just once, and it stuck so deeply in your mind, even after a decade?  That happened to me.  That happened to me and pear preserve.  The most common jams and preserves I've had are berries, apricot, and orange marmalade.  Prior to making this baby myself, I've only tasted pear preserve once.  Just once.
It was Autumn 1996.  I went on a 10-day Japan home-stay exchange under the LEX Language Research Foundation and Hippo Family Club program.  It was my first trip to Japan, and I still remember it like it happened just yesterday.  When I was staying with the Muto family, okaasan (mother in Japanese, that was how I addressed her) bought me sushi for dinner one evening.  Unfortunately, I was having a bad spell of migraine and any smell seemed to multiply itself by 10.  Needless to say, the raw fish didn't go down well that night.  I felt really bad, having wasted her warm hospitality.  Even now when I think back upon it, I still hope she understands that it wasn't the food or the culture, it was me and my horribly-timed migraine.  See, I couldn't speak Japanese back then and she didn't understand English very well.  All I knew was arigatou (thank you), konnichiwa (greeting), hai (yes), and samui (cold).  So I couldn't tell if she understood what I was saying.  Anyway, I went to bed earlier that night after some medication and woke up feeling much better in the morning.
When I went seeking for okaasan in the morning after brushing and cleaning, I found her in the kitchen with two dictionaries on the table and a note.  She had taken the time to look up words between two dictionaries and wrote a note for me.  The gist of it saying that she hoped I'm feeling much better and actually apologized for the food upsetting my stomach.  Instantly, I felt a warm and fuzzy feeling spreading all over me.  Then, she sat me down on the table and brought out a simple breakfast for me that tasted so good, I remember it to this day.  It was a thick slice of toast, covered in slightly melted cheese, and had a kind of jam spreaded over it.  Warm melty cheese toast with cold jam/preserve?  One bite was all it took.  I had to ask her what it was.  She looked up the dictionary and smiling, said: "Toast, cheese, and pear jam." 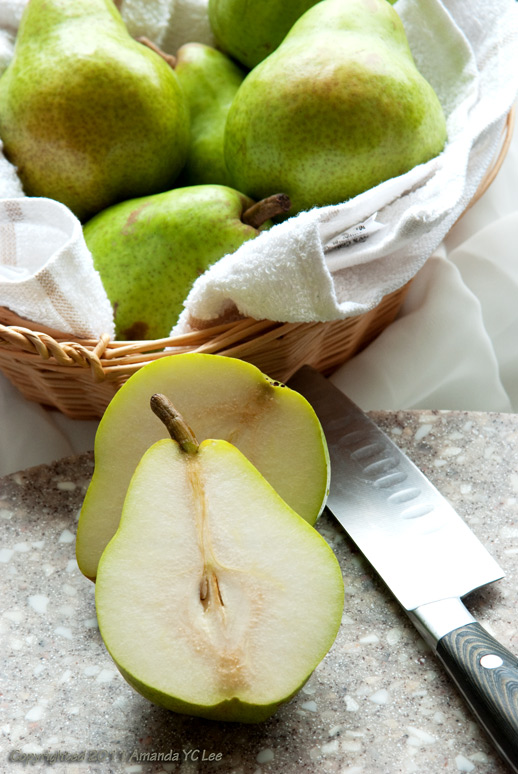 It's been more than 10 years now, but that simple breakfast stuck in my mind, unwilling to let go.  I tried looking for pear preserves, but they really aren't that common.  So, I decided to do my own research and make them myself.  And here, is one of my most cherished memory of Japan and okaasan, all wrapped up in one simple recipe.  It is my wish that you'll have beautiful memories with this pear preserve recipe as well.
Tips:
1- Jam and preserve are slightly different in a sense that preserves have bigger chunks of fruit whereas jams are mostly finely pureed.
2- If you prefer you may use pectin instead of lemon pith.  I just prefer using lemon pith because since I'm using lemon juice, there's the pith right there with it!
3- Sitting the pear slices in sugar overnight allows the fruit to release its juices.  I've also read that it helps the pears not to float up on top of your jar after cooking.
4- While preparing the pears, immerse the sliced pears into a bowl of cold water to prevent browning, especially if you have a large batch of pears.
5- If you prefer, do throw away the pith after cooking, or you can put it in a teabag or a tea-strainer for easier removal post-cooking.
6- To see what part of lemon is a pith, please see my Peach Preserve recipe.
Bartlett Pear Preserve
1-1/2 lb Bartlett pear, sliced
1 C sugar
1 bowl cold water
Juice from 1 lemon 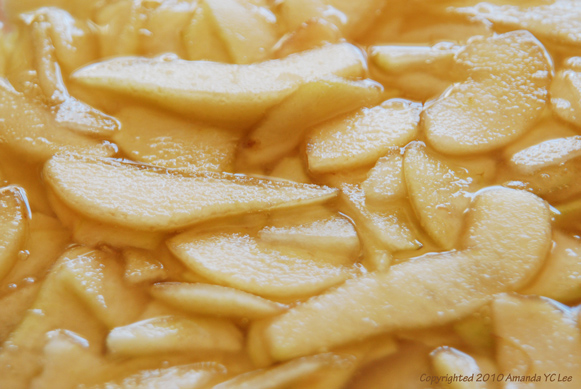 Wash, peel, and core the pears.
Cut pears into thin slices.
As you are cutting, immerse the pear slices into the bowl of cold water to prevent browning.  (Tip #4)
Drain water from the pear slices and toss well with sugar.
Cover tightly, and leave overnight or at least 12 hours.
Next day...
Half a lemon and squeeze out the juice and set aside.
Cut off the tip of the lemon and open up the lemon peel.
Carefully, place your paring knife between the pith and peel, and cut out the pith from the peel.
Place all pear and sugar mixture, lemon juice, and pith into a medium sized sauce pan.
Heat the pan over high heat until the mixture boils.
Once the mixture is boiling, turn down the heat to medium low and simmer for 2-3 hours until thickened and fruit pieces have all softened.
*Do not worry too much if it still seems slightly watery, it will continue to thicken as it cools.
After the preserve has cooled, transfer the preserve into a clean jar and store in fridge.
Posted by Amanda Lee at 11:37 AM

Amanda Lee
Colorado, United States
I love playing with my food. I'd peel off my layer cake, layer-by-layer, until my grandma gave me "the look". I'm the slowest eater in my family, because I enjoy my food. I used to be a picky eater, but I'm learning to accept and appreciate different food and cuisine. Most of all, I love playing around in the kitchen with different kinds of food.