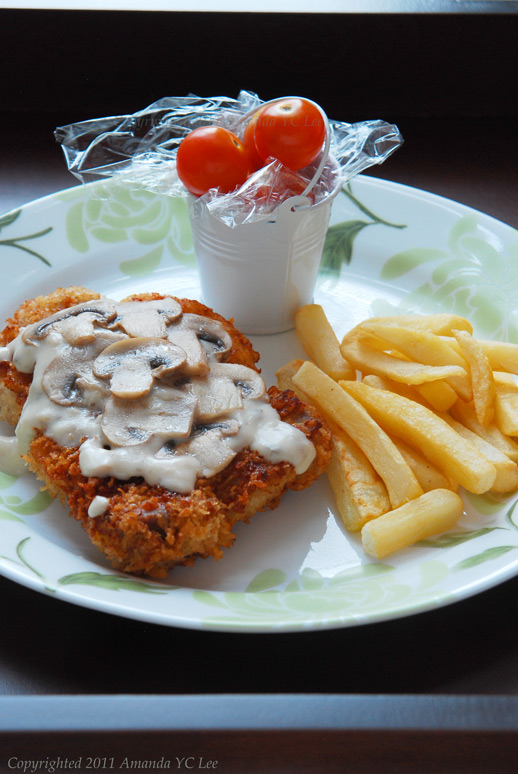 Guten Tag!  I love me some schnitzel, and that recent German trip was a blast in that sense!  All sorts of schnitzels, more than I could count.  However, I'm still terrible when it comes to cooking a good schnitzel wiener, or pork schnitzel.  So back home here, I used chicken, which technically should be called Hähnchenschnitzel, instead.  So why didn't I call it Hähnchenschnitzel then?  Well, see, I also serve it with mushroom cream sauce, as I have previously promised darling hubby during his recovery from wisdom teeth extraction.  We seem to crave what we're not allowed to eat.  Anyway, I was torn.  I almost named the title "Marrying Hähnchenschnitzel und Rahmschnitzel", but that doesn't sound quite correct...  Hence the above name, Cream Schnitzel with Potato Fries and Cherry Tomato.

Tips:
1- If you pound your chicken steak into a more consistent thickness, it will cook more evenly.
2- I prefer panko, Japanese bread crumbs, for its crunchiness, but you can use any types of bread crumbs you prefer.

Clean and de-fat chicken leg meat.
Using a meat tenderizer, pound the meat until roughly similar in thickness.
Lightly beat salt, pepper, and eggs together.
Heat up frying oil in a pan over medium-high heat.
Dredge leg meat through all purpose flour, egg, and panko (in this order).
Pan fry leg meat until golden brown.

In a small pan over medium heat, melt butter and mix in flour, and cook for 4-5 minutes, stirring all the while.
Stir in milk and mushroom.
Stir constantly until you have a consistent and smooth texture.

Ladle sauce over chicken and serve with cherry tomatoes and french fries.  Best served with German beer ;)  Personally I prefer colabier (mixture of cola and beer) or radler (mixture of lemon soda and beer).
Posted by Amanda Lee at 9:57 PM

Amanda Lee
Colorado, United States
I love playing with my food. I'd peel off my layer cake, layer-by-layer, until my grandma gave me "the look". I'm the slowest eater in my family, because I enjoy my food. I used to be a picky eater, but I'm learning to accept and appreciate different food and cuisine. Most of all, I love playing around in the kitchen with different kinds of food.